As the Incas were a civilization that was polytheistic, there were many different gods that they believed in and worshipped. Each one of these gods had a different appearance and different attributes. The Incas believed that these gods possessed special powers that influenced certain aspects of nature around them, so the Incas woud often worship these gods in order to please them. The Incas held in high esteem five major deities that they relied upon in order for their society to function properly.

Virracocha
Viracocha (World Creator)
To the Incas Viracocha was considered to be the creator of all things and the universe. He is greatly associated with the sea and was said to have created the universe, sun, moon, stars and civilization itself. He was worshipped as the god of the sun and of storms. These attributes he controlled were reflected in his appearance where he was depicted as wearing the sun for a crown, thunderbolts in his hands, and tears decending his face whic is symbolic of rain.

Depiction Of Mama Cocha
Mama Cocha (Sea Goddess)
Mama Cocha was the sea and fish goddess and legend has it that she was the wife of 'The Creator' Viracocha. She was worshipped mainly by fisherman and sailors as it's believed that she would make sure that there was always plenty of fish in the ocean. She was also believed to have prevented storms and calm the seas. She has particulary close ties with Lake Titicaca which is still called Mama Cocha by some today.

Inti
Inti (Sun God)
Inti was considered the second most important god in Inca religion, only Viracocha was considered more important than Inti. It was believed that he was also the sun of Viracocha and Mama Cocha. Inti was the sun god and he was depicted as a man. He was considered of great importance as Inti controlled the sun which bought warmth, light and sunshine needed for agriculture to flourish. For this reason farmers would be the ones who would pray to and worship Inti. Inti's importance is outlined as Inti was the god who recieved the most offerings from the people of Inca Civilization. In the event of a solar eclipse it was believed that this was a sign that Inti was displeased with the Incas and this would result in the Incas offering Inti human sacrifices to try and please him. Inti was represented with the face of a great golden disc.

Depiction Of Mama Quilla
Mama Quilla (Moon Goddess)
Mama Quilla was considered to be the wife/sister of Inti. She was worshipped mainly by women as she was believed to have ruled over menstrual cycles and marriage. She was often represented by a disc made of silver, as silver was considered to be Mama Quilla's tears that had fallen to earth. The Incas believed that the shadow on the moon was an animal attacking her and in return the incas would throw weapons at the moon to try and make the dog go away.

Illapa
Illapa (God Of Thunder And Rain)
Illapa was another Inca deity that was held in high esteem. Just like they relied on inti to make their crops grow the Incas also relied on Illapa as he was believed to have controlled the rain which is an essential part of making crops grow. He is depicted as a man in shining clothes, carrying a club and stone.

For a look at other Inca Deities check this site:
http://www.scns.com/earthen/other/seanachaidh/godinca.html 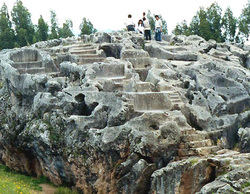 Stone Steps In Cuzco
Huaca
Huaca was a sacred place or object in the landscape. Huacas were places where significant mythological events had taken place. They held mountains, caves, springs and rocks as places that were sacred, as well as man-made objects like the pillars erected on the western horizon above Cuzco which can view the sun set. Families would often hold a special sacred amulet in their home in order to sustain balance between nature and society.