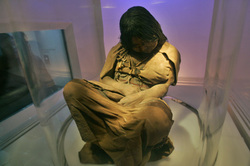 Frozen Inca Mummy
After Life
The Ancinet Incas believed heavily in the afterlife and they cared alot for the dead whom they had mummified and had placed into tombs. The relatives of those placed into the tombs would bring food and other objects to their resting places. They believed that they were communicating with the dead by doing this and that the deadwould then use these objects that were presnted to them. The incas would hold a funeral for eight days and would wear back as this was their colour for mourning. Relatives would also re-enter these tombs and would consult them on daily affairs The upper class would be buried in upper chambers, while the lower class would be buried in pits and caves. They believed that the dead who had lead virtuous lives would join the sun in heaven where they could participate in the lives of their descendents. Evil spirits however would be forced to live in the underworld in a desolate and cold eternity. 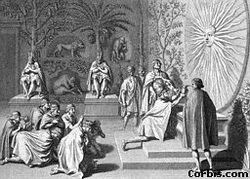 Incas Praise Inti
Divinity
The Incas believed that the members of the royal family were direct descendants of the first emperor, Manco Capac and his sister- wife, Mama Occlo Huaca, who were children of Inti (The Sun God). To keep this divine ruling the emperor would always marry his sister as his official wife, so that the heir would be a pure blood descendent of the all powerful Inti and they would rule with divine power. 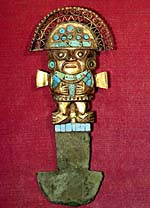 Sacrifice
When celebrating any mythical ceremony relating to the gods the Incas would often sacrifice children to the gods. Children were considered to be pure beings and their sacrifice would pay homage to the gods and grant eternal life for spirits in the divinity. Sacrifices would also take place in many other different rituals and ceremonies as well as in the event of an eclipse as Incas believed that an eclipse was a sign that Inti was displeased with them and they believed that offering a human sacrifice would please him.
For a Look On The Process Of Sacrifice View This Article: 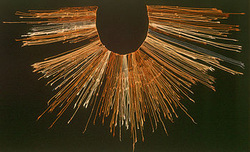 Quipu Used As A Communicating Tool
Social Structure
The Incas believed that the wealthy and the poor shouldn't interact with each other. This belief is reflective in many aspects of their society. It was considered a privilege to wear clothing in Inca society, and the clothing you wore was generally reflective of your social class. The common peoples clothes were generally alot plainer, while the upper class wore brighter colours, sandals and Jewellery. Education was also only available to the wealthy and the Incas were really big on oral teaching. Boys were taught religion, history and language, while girls learned how to weave and cook. It was also forbidden for you to marry someone who was richer or poorer than you. 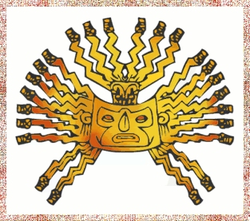 Dreams and Signs
People believed that the dead could communicate with them through dreams and through using symbols. This ead to the belief of priests being held in incredibly high esteem as they were said to be the ones who could interpret these signs.