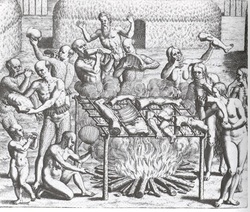 Depiction Of Cannibalism
Cannibalism
Cannibalism is the act of a human eating another humans flesh. In Inca culture the act of cannibalism was always ritualistic. It tied to sacrifice, warfare, death and regeneration. It was believed that by consuming a person you would inherit their power, accomplishments and skills of the dead person.
There were two forms of cannibalism: 'Exocannibalism' and 'Endocannibalism'. 'Exocannibalism was a form that involved eating the flesh of an enemy to prove one's power, to finalize the humiliation of the defeated foe and to take revenge on their companions. 'Endocannibalism' was a lot more respectful. The dead persons bones would be ground into dust and mixed into a manioc to be drunk by the family and other relatives to preserve within the kinship groups the essence of the dead person.

Modern Day Festival
Capac Raymi/ Inti Raymi
'The Capac Raymi' was one of the most crucial ceremonies that would take place in Inca Society. It occured around the time of the summer solstice. It was a time where they could honour the Inca sun god Inti. The 'Capac Raymi' served as an initiation ceremony for the young men of the ruling class. When the solstice arrived the boys' ears would pierced so that large ar spools that are worn by Inca royalty could be inserted.
The 'Inti Raymi' took place during the winter solstice and was also a ceremony that honoured the sun god. this was because during winter the sun was furthest away from the earth and due to the fear of a famine the Inca would fast for days and plead forr the sun to return. In return the Inca hierarchy would give the people a lavish banquet of meat. A white llama is usually sacrificed and a high priest will hold the heart up. This is to ensure the fertility of the earth. The Inca will then read the blood stained future of the Inca. 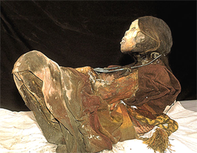 Inca Child Mummy
Capacocha
Capacocha was the most prominent sacrificial ceremony that took place in Inca socitey.It would involve the specific selection of mainly children who would be selected from all parts of the Inca empire in order to be trained and prepared for the ritual. This selection was made every year and those chosen were destined to become sacrificial victims. These sacrificial victims were offerings to the sun god 'Inti' or to 'Viracocha'. It was also used in events like war and famine as they believed that this was a sign that the gods were upset and the sacrifices would please the gods. The cermony would take place in the Inca capital of Cuzco and the sacrifices would be sanctified by priests who woud offer the sacrifices to 'Viracocha'. The sacrifices would then be taken along the sacred roads that linked the capital to the provinces. Here they would be either clubbed to death, strangled with a cord, or having a their throat slit, before a burial would take place. Another alternative action would be being buried alive in a constructed tomb. These practices served two main purposes: to renew the bond between the inca state and the people of the provinces, and to confirm the Incas lordship.
For a look into the recent findings of mummies see this article:
http://kasamaproject.org/science-technology/2994-26inca-rituals-sacrificed-children-the-warming-of-the-andes

Potatoes One Of The Crops
The Eight Day Feast
As the Incas relied heavily on agriculture in order for their society to function effectively it was very important to them to hold rituals that would honor the gods who make their crops grow. During the feast each day a ritual chanting begins at dawn when the sun rises. It then grows to a crescendo at noon, and finishes with silence by dusk. Burnt offerings of llamas are given to the sun god. The Inca royalty are dressed in clothing that is comprised of both silver and gold.

The Combing Of The Hair

This was the coming of age ceremony for girls. Priestesses would perform in this ceremony. During this ceremony a girl woud come of age and choose her new name. girls would be sent to Cuzco where the ceremony would take place and they would become either brides or princesses.of rulers. Only the most beautiful girls would be chosen. many people woud gather and there woud be dancing.